For such a beautiful, picturesque and pe

aceful place, the Champagne region has seen its share of bloodshed. Germans pushed the French and allies back to the Marne and chased them through Belleau Wood during the first world war, the war to end all wars.

The countryside is littered with cemeteries and memorials of the dead. Farmhouses and chalets have been turned into museums.

I imagine soldiers 100 years ago running through vineyards and up the hills into the woods behind my uncle’s B&B, along the same paths that modern-day hikers trek before they emerge from the woods to rest at the gite my uncle has opened in his barn.

This is the same B&B where John S.D. Eisenhower stayed while he researched his book Yanks, about the creation and deployment of the American Expeditionary Forces in WWI, and how they stepped into repel the Germans, only for the Germans to invade the region again less than 20 years later. WWII’s Battle of the Bulge was fought just north of Reims in the Ardennes Forest.

The blood that soaked this land has dried up long ago and vineyards flourish. Michelin restaurants are sprinkled along country roads. Hotels, B&Bs and gites provide lodging for the weary traveler.

On this particular spring morning in May of 2016, our major crisis is a wonky Internet service provider.  The Wifi (pronounced “whiffy” by the French) is down and Bill is determined to figure out why.

Also, the phones are not working.

Acting on a hunch, we get into his Prius and head down to the workshop where the Dutch crew working on the railroad tracks are based.

We cross a narrow bridge over the Marne and drive around the north bank, driving past mounds of gravel and stacks of lumber until we find some guys in hardhats.

Turns out a tractor or harvester ran into a telephone pole and knocked the whiffy out of commission. But the Dutch had Internet and phone service so Bill is able to contact the phone company to have someone come out and repair the lines.

Such is life in rural France. 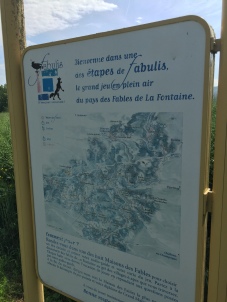 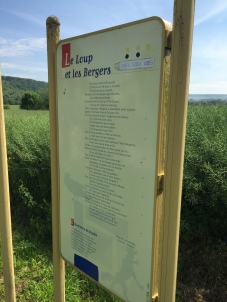 Apparently, being the proprietor of a rustic B&B in the Champagne region leaves plenty of time on his hands. Bill is happy to take me to the French version of a Home Depot to look at gas-powered weed eaters. We stop at two other outdoor-landscape shops before giving up the hunt.

Next stop was the medieval church at Mezy-Moulin, a town named for all its windmills. I have to stop and admire Bill, wearing a stetson, black hoodie and black jeans, lurking around the cemetery like the Grim Reaper himself or a version of William S. Burroughs. The guy is in his late 70s and can carry off that beatnik look, pretty incredible!

A sign posted near the church has a map of Aisne region showing all the spots where Jean de La Fontaine was inspired to write his fables. It looked like a journey for a future date.

We headed into Chateau Thierry, where I saw the statue of Jean de La Fontaine. We parked on the street and Bill pointed out the Maison des Fables, the manor house where Fontaine was born and lived. 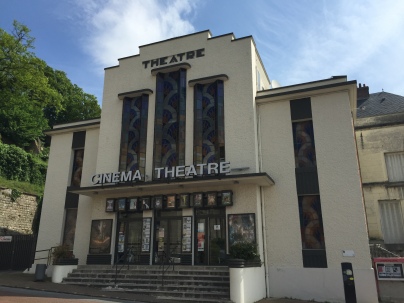 Bill also took me to the House of French-American Friendship, a testament to the long-lasting gratitude the people of Chateau Thierry have toward Americans. We are welcomed as royalty here and treated with privilege.

After we walked through the second-floor exhibit that focused mainly on Quentin Roosevelt and his contributions to the war effort, Bill said he had some banking to do. While he dealt with whatever business stuff he had to deal with, I wandered around the town center, sparse as it was.

A Maison de Ville stood at the center of a parking lot, surrounded by buildings on three sides. A supermarket, Art Deco movie theatre and the village flanked three sides, and the walls and stairs of the chateau rose behind the fourth rear side. The parking lot was sprinkled with some interesting vintage cars.

When Bill was done we walked up the stairs to the top of the chateau Bouillon. What remained of the fortress and castle were the ramparts and turrets overlooking the town below. From the top you could see the town, the Marne, the hills and valleys that gently spilled away. He pointed out one memorial in the distance, and another. 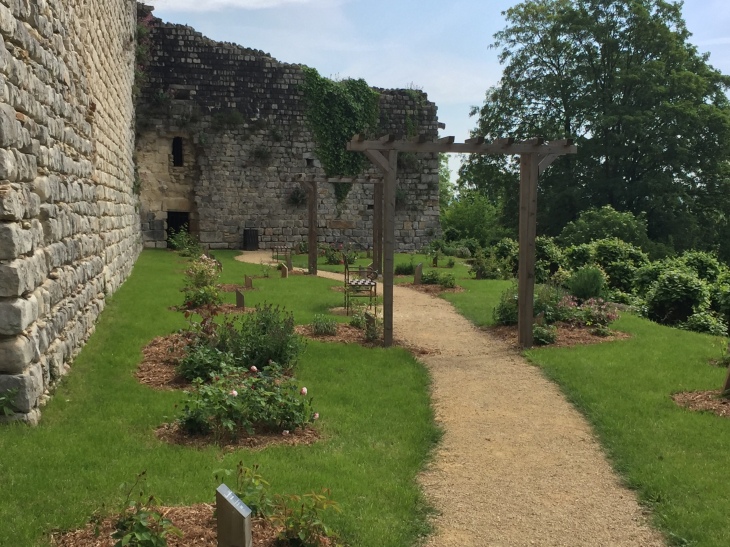 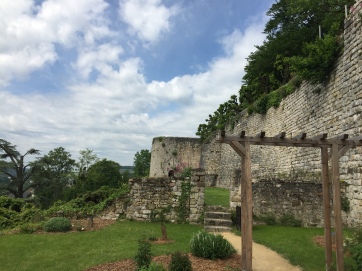 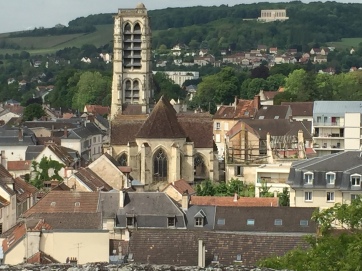 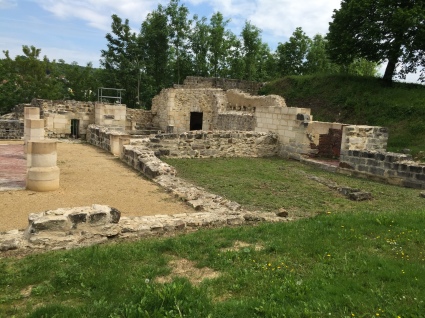 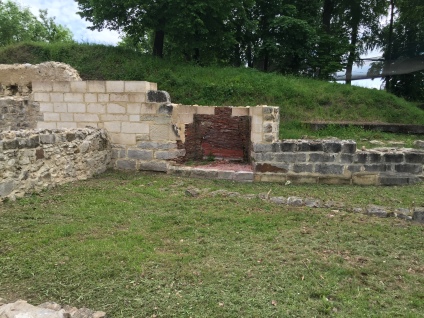 The fort ruins were used for various celebrations and festivals, like the annual Champagne tasting.  A sign on a wall said “Un suppot de Bacchus A Hait Sa Sante, son esprit et sa bourse.” It’s from a Jean de La Fontaine fable, and translates: “A henchman of Bacchus alters his health, his spirit and his purse.”

We clambered down and ate lunch at an Indian restaurant in town before driving off to the Aisne-Marne American Cemetery and Memorial in Belleau, where over 2,200 soldiers’ bodies are buried. The names of another 1,000 fallen soldiers whose bodies wer never found are inscribed on the chapel walls.

The memorial sits atop the front line battle trenches dug in defense of Belleau Wood. There’s a hole in the wall from an anti-tank gun.

It’s a beautiful and peaceful place laid out in a symmetrical T-shape. The landscaping was kept pristine. As it happened, gardeners were trimming the shrubs and lawn. Bill had to chat with one about his gas-powered weed whacker. 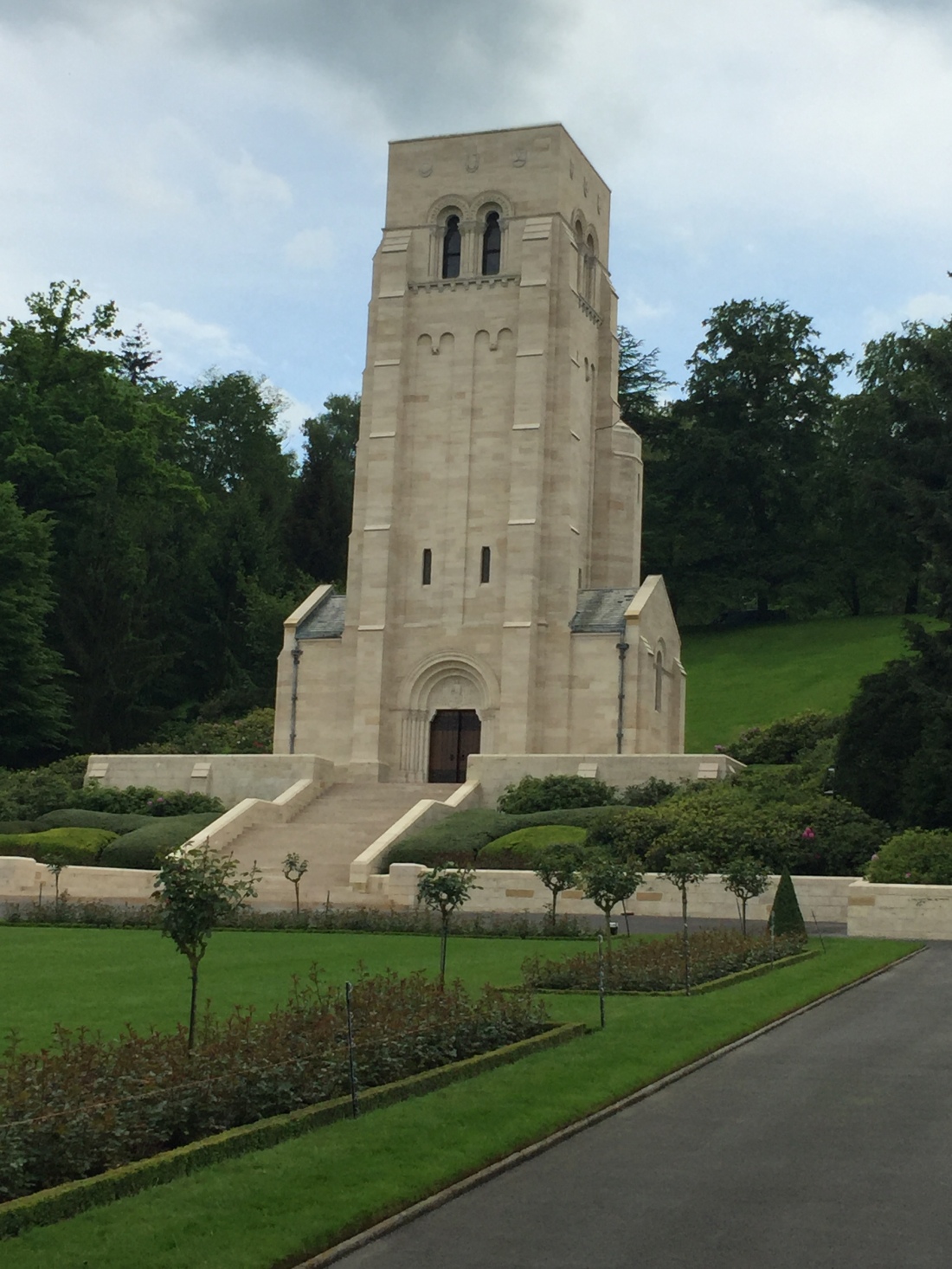 I'm a veteran newspaper reporter based in northwest Florida and consider myself a semi-native of that state, even though I was born and raised on New York's Long Island. I spent my life traveling around the U.S. and sailing to the Bahamas. After conquering Canada and Mexico, I began to explore the world beyond our continent -- Europe and South America. When I first set eyes on Paris, I fell in love. This blog is a chronicle of my love affair with Paris, its culture, neighborhoods and cuisine, and the many side trips I've taken to other parts of Europe. Bon voyage and bon appetit! View all posts by chronichypochondriac